What My First Law School Finals Were Like: A Summary 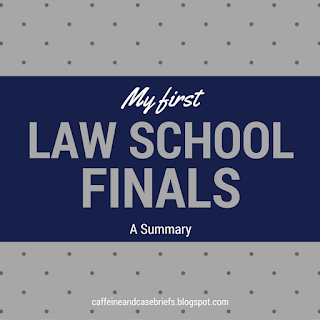 Hey there, everyone! I know a lot of you have probably been wondering where I've gone, since my last post was during Thanksgiving break. Well, the answer is... FINALS. So first, I want to thank you for your patience during the last month of me falling of the face of planet. Secondly, let's get to it! Here is what my first law school finals were like!

At my law school, we had exactly one day of classes after Thanksgiving break - we had to go on Monday since we missed a Monday back in September for labor day. For my research class, we had a make-up class before break so we didn't have to go back after Thanksgiving. In my civil procedure class, we had a review for finals so we didn't have to do a real class. So all that left after Thanksgiving was one, two-hour torts lecture. This meant that I was essentially in finals mode as soon as break was over. Following Monday classes, the school had two "study days" which meant no classes or finals, and then our finals period started on December 1st. Yep - you heard that right - we had finals right away in December. If you thought finals week in college was bad, just wait until finals last 2 1/2 weeks in law school.

I was lucky and didn't have my first final until December 5th, which was my criminal law test. Personally, I was happy to have my criminal law final first, as it was the test I was the most worried about it. Although criminal law had the least amount of material, we had to memorize case names, which is a lot harder than one might think. The format of this final was two essay questions. The first essay question was supposed to take two hours - where we had to answer a series of questions about a hypothetical situation. The questions were generally what charges could be brought, what defenses the people might use, and who in the situation could be charged. The second essay question was much shorter, and specifically asked what defenses a hypothetical client could bring. Overall, I feel like I did an okay job with this test and was able to work in a lot of the class material. I finished around 20 minutes early, so I was able to work in some extra stuff. And, at that point, I was just glad to have one of my finals out of the way.

The next test I had was four days later, and was over Civil Procedure. This was the class I felt the most confident about. This test was a mixture of 10 multiple choice questions, which were supposed to take around an hour to complete. Then, there was a series of essay questions that were supposed to take two hours. The essay had a hypothetical situation which was two pages long. It took probably a solid 15 minutes to read and digest everything. Luckily, I still finished everything in time, and felt pretty confident in my answer. Like I said, I was confident in this class, which helped me understand the material and be able to show that on the test. Of course, I don't know how well I did until grades come out, but I feel like I did well.

Lastly, I had my torts final. This final was a beast, because of the amount of material we covered in that class. Essentially, this test was a two-page hypothetical situation and ended with a "who can sue who" type of essay prompt. Essentially, this meant that I spent an entire three hours typing out as much as I could. We also had some "bar exam" questions on this test. For those of you who are unfamiliar with bar exam questions, these are questions about the concepts where you don't just pick an answer that is right - you have to pick the answer that is the most right. So as you might imagine, those were incredibly difficult. This final I finished just in time - literally in the last minute. At the end, I felt as though I did well again, but that might just be the kick of endorphins from being done with my first set of finals!

So overall, I made it through my first set of law school finals and lived to tell the tale! I am planning on writing a few more posts about finals - studying, exam tips, etc. Let me know what you guys would like to hear about! I look forward to writing more to you soon, and I am glad to be back on my blog!