How I Studied For Law School Finals 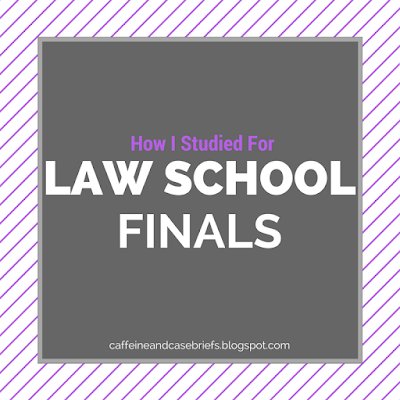 I've written a quick summary about law school finals already, but it's time to jump into some of the more detailed aspects of the hell that is law school finals. But, to take a step back from actually taking law school finals, I figured I would back it up to preparing for finals and how I spent my time studying. So, let's rewind to the beginning of of December, right after Thanksgiving break to when my studying began.

I also want to preface this by saying that this is my  way of studying for finals, and I am not necessarily saying it is the way you should study for finals. Everyone studies in their own way, and if you can use some of my methods or ideas - that's great! If not - you do you, boo.

My first final fell one week after returning from Thanksgiving break, which meant I had an entire week of nothing to prepare for my first final. However, I only had three days between my first final and the next one, and then three days between the second and third, so I needed to start studying for all of them right away. Plus, I would get bored if I tried to stay on one subject for an entire day, so studying for all of my classes made time pass just a little bit easier.

I started my finals week by making a study schedule, which I highly reccomend that you do! I know it can be hard for a lot of people to pace themselves and force themselves to focus without actual classes to attend or someone making them study, so writing out when I wanted to study for what made me feel like I had a little bit of structure in my days. I tried to make it so I studied for two classes per day, so that I never felt too overwhelmed, but I also never got too bored. Planning my days, I usually scheduled myself to go to the library and study for a few hours in the morning, from about 9:00 a.m. to 1:00 p.m., and then I would go home to eat, relax, and maybe take a nap or run some errands. Then, I would head back to school from aroun 6:00 p.m. to 9:30 p.m. to study again. Without classes during the day, I needed a few hours in between study sessions to break up the day.

You might have heard that outlining is the best way to study in law school. Some people do this throughout the semester, and study off their outline during finals. Others, like myself, actually make their outlines as their method of studying. The downside of this is that there is a lot of information that you learn in a semester, and outlining over the course of a few days is a daunting task. I outlined mid-semester for my classes as well, so I only had the second half to make during finals. This made it a lot easier to complete a thorough outline at the end of the semester. My goal was also to have my outlines complete two days before the final, so I could spend the last two days studying off of them.

The outlines that I created for all of my finals were overall pretty detailed and long. I know some people that create their outlines as kind of a "bare bones" structure of the class, but I wanted mine to be a good enough summary of the class that I could study off of my outline alone. Mine weren't some of the crazy 100-pagers that you may see, but mine were all at least 20 pages long. This made it so that I could study for the entire class by simply reading through the outline.

For my criminal law final, my professor required us to memorize case names. This rarely happens, so it was a complete pain to do. I knew I wouldn't be able to memorize case names from my outline, so I also made flashcards. This helped me quickly and easily memorize all 63 case names and details that were required. Although it was annoying, I always think flashcards are a great way to memorize terms, cases, or other small pieces of information.

One thing that I am sure many of you are wondering about is whether or not I was in a study group. To answer that simply, no. For me, studying in a group is a distraction. As a very social person, I would rather talk to my friends than study with them. So I prefer to study by myself. I did study with a few friends for CivPro, but only because they wanted help with a few concepts that I had a firm grasp on. Other than that, I pretty much locked myself in a study room at school and ignored the world when I was trying to process the information. However, I know some people that need to study with others because they learn more from talking about the material, so if that works better for you - by all means - do it!

As you guys can see, my study method was relatively simple. But if simple works, that's what you have to do! Remember for when you go into time to study for finals, it's equally as important to take care of yourself while you study. Eat right, drink water, get enough sleep, cry if you need, and make sure that you feel well to help keep your brain as happy and healthy as possible.