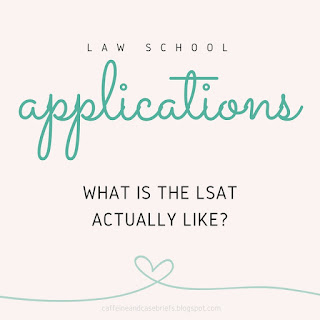 So today I'm going to talk about a very, very, very important piece of the law school admission process - the LSAT. For those of you who don't know, LSAT stands for the Law School Admission Test, and it is basically the ACT/SAT of law school. But more important. And a lot scarier.

The LSAT for me is a horrible, awful, no good memory and I hated every second of it. However, it's a very important part of preparing to apply for law school, and you should take it very seriously. The test is really hard, and quite expensive, costing $180 for the test alone. Thus, I would only recommend the LSAT for people who are serious about attending law school. I remember when I was taking it, there was a herd of girls in all discussing how they were taking it because "Well I've always thought maybe I wanted to go to law school so I decided to just see what happens!" I remember being appalled at how casually they were taking a test that was, for me, one of the most important evaluations in my life.

What is the LSAT actually like? Well, for those of you who have watched Legally Blonde a few too many times (myself included), forget everything Elle Woods taught you about this awful test. I, for one, am angry to this day that the movie portrayed someone who studied for a few weeks or so getting a 179 on her first attempt at the LSAT. People that want scores that high generally take at least an entire year to study, and usually dedicate a lot of money and time to learning how to take the test.

Since we're discussing scoring, LSAT scores range from a 120 to a 180. A 180 is a perfect score, but depending on the test you may still be able to miss a question and get a 180. The median for Yale is a score of 173 for anyone wanting a reference. That's missing about 7 questions out of 100ish. If you want to know what a "good" LSAT score is, it depends on the school you want to get into. Pick a school, then look at that school's median and make that number your goal. If you're looking to get a good scholarship, shoot for the school's 75th percentile LSAT score. All of these scores are required to be reported by the ABA, and you can usually find them on a law school's website.

The actual test of the LSAT consists of 5 sections and a writing section. The five sections include 2 "logical reasoning" sections, 1 reading comprehension section, and 1 "analytical reasoning" section which is better known as the logic games section. There is also 1 experimental section that does not count toward your score, and can be any of the other three types. You won't know which section this is when you take the test, which is unfortunate. You will be able to figure out which type of section was experimental. For instance, if you have two logic games sections (I'm so sorry), one of those will be the experimental and one will be scored.

The test lasts around 4 or 5 hours, and it is a really long day. Testing centers and the LSAT have super strict rules about the LSAT and what you can bring. For example, you have to bring everything in a clear zippered bag, and you can pretty much only bring pencils, a water bottle, a watch, and your ID. I remember making a joke that taking the LSAT was like going to prison and kindergarten at the same time. You keep all of your possessions in a clear zippered bag, and they are really strict about what you can have, like prison. But you're allowed to bring snacks, tissues, and a juice box, so it's also basically kindergarten. Your admission ticket will have the full list of what you need and what you can and cannot bring.

As I've said before, the test is really rather difficult. It's a test that doesn't quiz what you know, but instead it analyzes the way you think. For the most part you can't learn the information, but you can practice the type of thinking it requires. The best way to prepare for the LSAT, in my opinion, is to practice as much as you can.

People that take the LSAT without preparing should never attend law school.

There's always a group of students that take the LSAT bragging about how they didn't study, and they're usually the same students who look pale and sickly after the test. It's hard. You need to prepare. The best way to prepare depends on what type of student you are. Some people take a course, some study with an online program, and others, like me, choose to self-study. I used a variety of LSAT books to prepare. I highly recommend the Powerscore LSAT Bibles. Anyone who uses these swears by them. I also recommend taking as many official practice tests as you have time for. I bought like three books and used all of the tests. For online courses, I've heard great things about 7Sage, and I recommend at least taking advantage of their free parts of the course. Also, some universities have logical reasoning classes in their philosophy departments, which is another great way to prepare (and earn credit in college!).

Overall, it's very important to take the LSAT seriously and make sure you put a ton of effort into studying. In the future, I plan on posting more in-depth about specific aspects of the LSAT, so if you have any questions, please comment I and I will address them then.