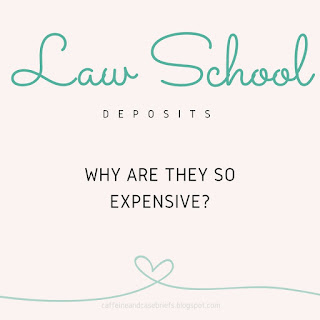 Day two of blogging and I'm already getting into the ugly topics - money.

If you expect me to answer the question that is asked in the title of this blog, I would like to let you know that you are wasting your time reading this. Because I have no freakin' idea why law school deposits are so expensive. Although I understand the necessity of law school deposits, I am definitely not a fan.

You see, after the rush of acceptance letters and scholarship offers, you only have a few months to make a permanent decision. It seems that the deadline to commit to most schools falls somewhere within the first few weeks of April. When a decision is reached, one must usually fill out a form or two and send the first of many checks to the chosen university. For my school, I had to submit one $750 deposit by April 15th, and then a second one of the same amount by June 10th. Yep, it costs $1500 to officially decide which law school to go to.

From what I've heard, my school has some of the most expensive deposits around. Talking to some of my friends from undergrad that are attending various law schools, their deposits ranged from $250-500. And although I know that I won't be paying tuition thanks to the generous scholarship assistance at my school, it's still no fun knowing that I'm paying some of the more expensive fees. Some of my friends that are attending law schools have told me they put down deposits at multiple schools while they are deciding, which is absolutely insane to me. But, if you are really torn between schools and your deposits are some of the lesser dollar amounts, then I suppose it may be worth it.

I already submitted my first deposit when I made the decision to attend my school. I've spent the last few months saving for the next one. I decided I wasn't going to submit my second deposit until final grades were in for undergrad, assuring that I had graduated. Although now that it's that time, I'm still not thrilled that my savings account is about to take a hit.

Not only do I have to pay this deposit soon, but other expenses are adding up as well. Last night my car got attacked by a hailstorm, so I have to pay to fix that. I'm going to Washington D.C. this summer, and I have yet to purchase my plane ticket. Looks like I'm going to have to be really careful with money, since I want to shove a lot of money into savings and pay for what I need to this summer.

Can't wait to be broke for the next three years. Yay, law school!
- Bailey

So this totally makes sense, and I cannot believe that I didn't realize this before - but your deposit is a deposit on your tuition! Duh. So the money that you give a law school the spring before you attend will be applied to your tuition in the fall. This generally just means that it is is money you won't have to pay later - which is totally awesome!

Another bonus for me on this topic was that I actually received a full-tuition scholarship to law school. This means that I don't have to pay tuition. You might be wondering, "But, Bailey. If you don't pay tuition, where did your tuition deposit go?" The answer: back in my bank account. That's right, I got the entire $1,500 back in August, which I used to buy textbooks and buy things for my new apartment.

Generally, this means that the tutition deposit wasn't as bad as thought. Still not the most fun thing in the world - but it was more practical than I had originally thought.