Where To Live In Law School 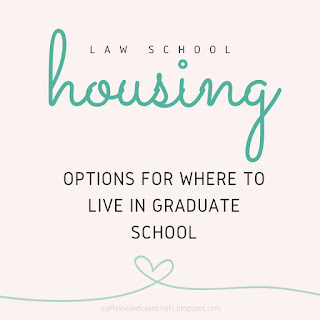 Knowing that I was moving, I began to weigh my options for living arrangements as soon as I picked my law school. Did I want to rent an apartment? A house? Live on-campus? Private student housing? There are so many options. Depending on where your law school is, there might be more or less options.

Bigger universities tend to have options for graduate student housing in on-campus apartments or some type of dorms. It is less likely to find this type of housing at a smaller university. I have even seen a few universities with law student housing, but this seems less common. Benefits of university housing is usually proximity to campus, easy payment using financial aid, and living in a community with other students. The downside is usually the cost - on-campus housing tends to be much more expensive. Along with that, you will always be on campus. For me, I need to get a break and leave every now and then for my sanity.

This is actually the option that I chose for law school. These types of communities are found at bigger universities usually, with a large undergraduate and graduate population. These are usually apartments that have private bedrooms, with shared bathrooms and living spaces with 1 to 3 other roommates. The nice thing about these is usually most utilities are paid for in your rent, they are typically furnished, and offer promising student amenities. My community has a gym, computer lab with free printing, pool, volleyball courts, and several other perks. The downside to these are the cost. I am paying $600 a month for one bedroom in a three bedroom apartment. However, for me, the convenience is worth the cost. Because I am moving from so far away, this apartment is nice due to the fact that it is already furnished and set-up specifically for students.

This is likely the most common option for law students. Obviously, apartment communities are pretty numerous in most cities, and there are several options in any price range. They are usually pretty affordable and allow for a lot of freedom for law students. With apartments, you do need to remember that there are additional costs because of utilities, furnishing the apartment, and commuting costs to and from campus. However, an apartment is typically the ideal set-up for a law student.

Honestly, there is probably very little that is different from renting an apartment to renting a house. There may or may not be more or less houses available to rent depending on the area you are attending law school. Renting a house is often a good solution for people that want to have several people live together but still retain more space. This can often be more affordable than an apartment if you have more students that want to live together.

Should you get a roommate?

This is one thing a lot of law students ask each other. Personally, I did not want a roommate at first because I thought living alone would be easier while I was in school. However, the fact that I am moving away from everyone I know meant that I was in this alone - and I didn't know if I wanted to live alone too. I decided to get a roommate or two in order to make my living situation more affordable and so that I would be able to get to know someone better when I moved far away. In the end, I decided to have two roommates that I found using our law student class Facebook page.

I have only been able to get to know my roommates via texting and messaging on Facebook, but overall I am excited about living with them. It is making my move a lot easier, because we are splitting the amount of things we need to bring. It is also nice because I have go-to people to ask questions about school, moving, and other concerns.

When it comes to choosing whether or not to have a roommate, pick whatever is right for you. If you have typically had bad roommates, you may just want to live alone. If you like always having people around and want to cut costs, pick a roommate. And if whatever you decide doesn't work for you, then you have two more years of school to figure it out!