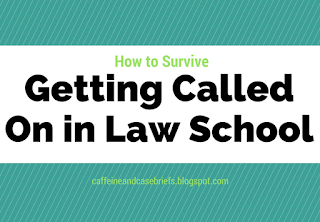 So, if you're anything like me or the majority of law students, you probably think that the most terrifying thing about law school is the fact that the professors use the Socratic method to teach. For those of you that are unfamiliar with the Socratic method, it basically means that the professors will call on you at random at their own whim in classroom discussions. Basically, this means that you show up to class, the professor picks a student and asks them a bunch of questions to stimulate critical thinking. This is a little bit different than in undergrad, where classroom participation was a voluntary thing.

I won't lie to you, professors cold-calling you is always going to be terrifying. I was called on to present a case in torts today that I was more than adequately prepared for, and my heart still raced as I was going through the case facts. I assume that it will only get easier with time, but I am seven weeks into law school and it's still scary, so don't expect to get used to it.

Different professors choose how to call on students in different ways. My torts professors lets people volunteer, and cold-calls when there are no volunteers - pretty much everyone has to talk at some point during each class. My civil procedure professor randomizes the order of all of our names and calls on us in order of his randomized list. My criminal law professor calls on people completely at random, however she chooses. I've heard of some professors that put students' names on note cards and draws them at random. Some assign certain people to be "on call" each day. I've heard of others assigning cases to people throughout the semester. The moral of this is that each professor has their own method. But at some point in each class you will get called on without volunteering.

So you might be wondering, how do I survive this brutal attack of professors' wrath? I'll be honest, I haven't figured out a foolproof way, but there are some ways to make it easier:

Okay, so you might be thinking duh. But it really is that simple at the most basic level. If you actually did the readings, took notes, briefed your cases, and sort-of know what's going on, you will feel so much better about the professor possibly calling on you. It's much less nerve-wracking being on the spot if you actually know the material. For example, yesterday my criminal law professor cold-called me, but because I had read the case twice and had a beautiful brief written out, I nailed it!

Participate Outside of Being Cold Called

This one basically working the system, but professors like to cold call to engage students who maybe not paying attention or don't seem as willing to volunteer. Thus, if your professor allows for voluntary participation outside of the Socratic method, raise your hand and answer questions, ask questions, or make a comment! This will definitely decrease the amount of times your professor will ruthlessly call on you.

Pause and Think Before You Speak

If you are especially nervous about being called on or don't feel as comfortable with the material, don't be afraid to take deep breath and a few seconds to consult your notes or think your answer through before responding to the question. Your professor will appreciate a well-thought out answer more than you stumbling over your words and trying to figure it out. This will also give you a second to figure out how to incorporate your notes to show you are prepared.

If You Don't Know the Answer - Admit It!

Okay, seriously, if you don't know the answer to the question when the professor calls on you - admit it! Give your best answer, or part of the answer if you can, but please do not give the wrong answer. One of my professors will make fun of students that do this, I've heard of others that are very mean if you answer incorrectly. But if you simply say, "I don't know that I found an answer to that within the case facts" or, "Well I think it might be this, but I am unsure if that is true in this case," most professors will accept that and move on. Try to show that you at least read the notes though.

Realize Nobody Will Remember This

Seriously, if you screw up an answer in class, the only person that will remember is you. On Monday in torts, I gave an entire case presentation and got the holding wrong. However, today I gave a flawless case presentation and nobody remembered my flub on Monday. Everyone screws up every now and then, and most people are more worried about themselves messing up than you. So don't worry about it if you don't have the right answer at first.

Overall, no matter when you get called on in class, you'll be okay. After awhile, you can't imagine class without the fear of getting cold-called. If anything, it's a really effective motivator to study. I'd rather spend my free time reading cases over and over until I understand than be embarrassed in class. And that is definitely part of the reason why law schools use the Socratic method. So take a deep breath, do your readings, and get to class - you're going to nail that cold call today!