How to Brief Cases for Law School 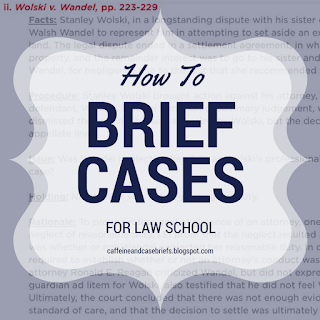 If you're a law student or thinking about going into law school, chances are you know a little bit about the work load and studying. One part of studying and class preparation you may have heard of is "briefing" cases. As a law student, briefing cases is something that you will grow to be very familiar with and most likely do every day.

So what is briefing cases? Essentially, briefing cases is organizing the information of a case into notes in order to assist you with classes, writing assignments, or general understanding. Some students only do briefs for important cases, for certain classes, or only when required. Others, like me, do them for every single case. You might think that sounds like it takes a lot of time - and truthfully, it does.

So why should I brief cases? Well, the first reason I can give you is that it will ensure you have read and understood a case, or at least made an attempt. Secondly, it is *so* helpful when a professor cold calls you and asks for the facts of the case, and you can just look down to you brief and have a perfect little notes section already written up for you.

How do I brief cases? Well, there are several different ways to brief cases. One of the ways to brief a case is through the IRAC method (I have never personally done this, but check out Nikki's blog for a good explanation), similar to that is CREAC, which is essentially the same way as IRAC with different organization. However, I simply state the facts, procedure, issue, holding, rationale, dissent/concurrence, and rule. Below is a detailed explanation with examples:


And that's all she wrote! That is a typical case brief that I do for each case, every single class. Now, you have to remember that you might not have every section for every case. Most cases don't have a concurrence or dissent, and some you don't need to write about procedure. Many cases, each section will only be a sentence or two. And most of the time, the only person that will read your briefs is you, so you only need to write them for your own understanding.

I definitely recommend writing or typing out briefs for every case. It helps me understand what each case is about and fully understand it before I get to class and potentially get cold called. Obviously, there are other ways to brief cases and you might find your own style. For those of you looking for a starting point, I hope this helped.