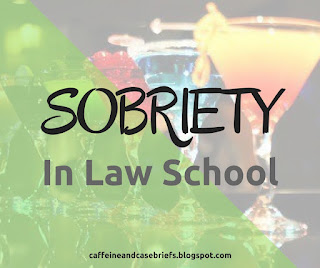 Hey, everyone! I thought I would share something new with all of you about myself - I don't drink alcohol. I've tried a few drinks here and there, and I used to work at a restaurant that was tied to a brewery. so I know my beers, But for the most part I refrain from the well-rehearsed college ritual of drinking. I might have one drink every few months, but other than that I am basically sober. For those of you who are in law school, you know this is extremely uncommon among law students. Because of my unique experience, I thought I would share what it has been like for me thus far.

My reason for not drinking is pretty simple - I just plain do not want to or feel the need to. Some people choose not to drink for religious reasons or for their health, others might be recovering alcoholics or alcoholism may run in their family, but whatever the reason someone may choose not to drink, they will usually be in the minority. However, being someone who doesn't drink often puts you in the position of having to explain yourself which can get rather awkward - especially in a place where drinking is fairly common, such as a college campus.

I am going to law school at one of the nation's biggest universities, which of course makes it a place where there is an ample amount of parties and opportunities for drunkenness everywhere. And, in law school, everyone is over 21 so drinking is completely and totally legal. Therefore, many of the law school social events involve drinking. There are many happy hours, tailgates, and a weekly event that is humorously named "Bar Review" that is basically a law school bar crawl. I think I have only been invited to or attended a handful of events that didn't involve alcohol since starting law school. With all of these opportunities for drinking and partying, it can get exhausting having to explain over and over again why you do not drink.

While this may sound overwhelming if you are someone who plans on or tries to refrain from alcohol, don't get worried. It is not impossible, and it's not really that difficult. You just have to be strong-minded and okay with a little bit of adversity. But, as a law student, you are probably already to prepared to argue your point so I think that is a manageable task. Here are some things to remember if you plan on staying away from alcohol during law school, and tips to help you manage it:

Alcohol isn't the enemy. It's just not something I have chosen to include in my life or my law school experience. Staying away from alcohol in law school can be harder than it was in undergrad, but it's not impossible. If you're planning on staying away from drinking in law school, I commend you. It might be difficult at times, but it is definitely possible. If you are looking for someone to support you in your sobriety, feel free to reach out to me - I'm always there to help you out and would never mind being someone's support system.