Being Young In Law School 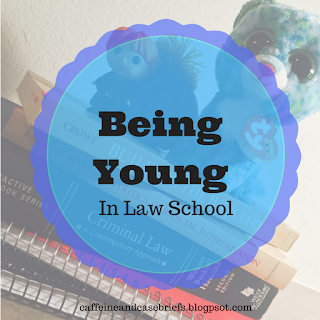 I am one of the youngest people in my law school class. As far as I know, I am the second-youngest person in my law school class, as far as I know. Like many law students, I cam to law school directly out of undergrad - I obtained my Bachelor of Science in Political Science in May of 2016, and began law school the following August. However, I actually only attended undergrad for three years. By some luck and apparently overloading on classes, I was able to get my degree an entire year early. Not only that, but I have always been young compared to my classmates - I turned eighteen the July after graduating from high school. So, all things considered, I began law school barely a month after I turned twenty-one.

Being young in law school has definitely contributed to a unique experience among my peers. There are a handful of other twenty-one year-olds in my class as well, so I am not alone. However, the majority of my classmates are at least a year or two older than me, and some even more than that. However, being young in law school hasn't been detrimental to my law school career in any way, and if anyone else is in a similar position, I advise you not to let it deter you.

Most people associate being twenty-one with a year of partying, fun, and free-spirited shenanigans. Being in law school, this is clearly not an option. I've replaced bar crawls with bar prep, hangovers with early morning study sessions, and spontaneous roadtrips with well-planned library trips. Law school isn't necessarily boring, but it is serious. If you want to spend your time partying and having fun, I recommend you get that out of your system before taking the plunge into your 1L year.

Another way being young might impact you while attending law school is lack of life experience. Some of my classmates have used their time in undergrad to study abroad, other have years of work experience, and others just seem to be better adults. I didn't have time for any of that - I spent three straight years studying in undergrad, and then came straight to law school to study some more. Sometimes this makes me feel a little intimidated - like I am less of an adult than my classmates. But then when it comes to reality, I feel like I have a better grip on most things like paying bills, handling insurance claims, going to the DMV, etc. So it's all about how you handle things.

Overall, I wouldn't change my experience of being one of the younger ones in my class. Sure, it brings a variety of challenges. But it also brings an opportunity for me to prove myself. Unless I tell people, they usually don't realize how young I am, and I certainly don't act like a typical twenty-one year old. So don't let being young hold you back from going to law school. If you have an experience anything like mine, it won't matter a bit. I'm not ready to let go of my immaturity yet - I still have stuffed animals and toy trinkets stacked on top of my law books. But I'm ready to be a law student, and nobody but me knows the difference.