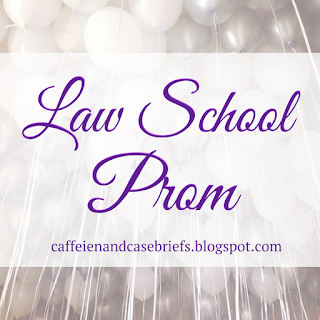 It's that time of year when juniors and seniors in high school get so excited to have the most magical night of their lives thus far. Limousines, fancy dresses, tuxedos, and dancing the night away is every teen's dream. And then when high school is over you have nostalgia for the days when life was so simple and nights like that existed. Unless you go to law school.

I've talked before about how law school is actually a lot like high school. This weekend, that analogy strengthened when we had the ultimate high school event - prom. Yep, you heard that right. Law schools have prom. Technically, it's not called a prom. It's usually referred to as a Barrister's Ball, or some schools just call it a spring formal. But don't let that fool you, any and every law student will forever refer to it as a "law prom," because it is.

At first, when I heard about this event, I rolled my eyes a little bit. After all, I graduated high school four years ago, I don't need to attend another prom. There was so much hype for the event then, it feels weird to have that same level of excitement as an adult. However, I didn't want to miss out on the experience, so I decided to go ahead and buy a ticket to go. After all, I've studied hard all year and deserve a night of fun and enjoyment. And now I'm glad that I went.

For those of you that also have law proms at your schools and have questions, I've decided to address some of them here. So without further ado, all about law school prom!

What Do People Wear?

Remember prom in high school? Fancy dresses, suits, and tuxes. Same thing at law shool proms. Of course, the dresses tend to be a bit more grown up in style, but the idea is still the same. My school had a formal/semi-formal dress code, but most people generally wore typical prom dresses. I got mine on clearance at a department store prom sale, and it was a very classic prom dress. A lot of the guys just wore suits instead of renting tuxes, but there was a tux or two in the crowd. It was really fun to see everyone dressed up, and it was a nice departure from the typical hoodies and jeans that everyone wears to class every day. Don't be afraid to break out an old prom dress, buy a new one, or just pull out your fanciest outfit for the event. A lot of people even got their hair and makeup done, got their nails done, and did the whole thing up. Go big, or go home!

Here's a classic mirror selfie for you.

Yes, and no. Primarily ours was a formal dinner. We had a catered buffet dinner at a country club. The difference between this and your high school prom is that it is a 21+ event, so it included an open bar. However, toward the end of the night, the tables were moved and the dance floor opened. For a three hour event, they had about one hour of dancing which was just the right amount. And of course they played dance floor classics like the Cupid Shuffle, which did not disappoint the throwback prom feel.

Drinking. Yes or No?

So like I mentioned above, this event included an open bar (for two hours, then it turned to a cash bar). As I've written about, I'm not really a drinker, so this didn't really matter to me. For other people, this is a big deal. I mean, free alcohol is kind of a cool thing if you're into that. So therefore, the answer to this question is yes, drinking. However, be smart about it. You're always representing your school, and you never know what kind of impact you could make on your future. Therefore, don't get sloppy drunk, be nice to your bartenders, and make sure you keep it classy. I watched one of my classmates get kicked out for taking nine beers from the bar at once without the bartenders. Don't be that person, please.

Should I go to my school's law prom?

YES! I'm not one for going out. I'm definitely not one for getting all dressed up. But after some peer pressure from my classmates, I decided to go to our formal after all. It was a ton of fun, so nice to see everyone dressed up, and and once in a lifetime experience (or three times if you go every year). Plus, now I have some great pictures of me dressed up to show my relatives I don't always look like a mess like I do at school. I highly recommend everyone attends this event if your school has one - it won't disappoint!