10 Things You Should Buy For A New Puppy 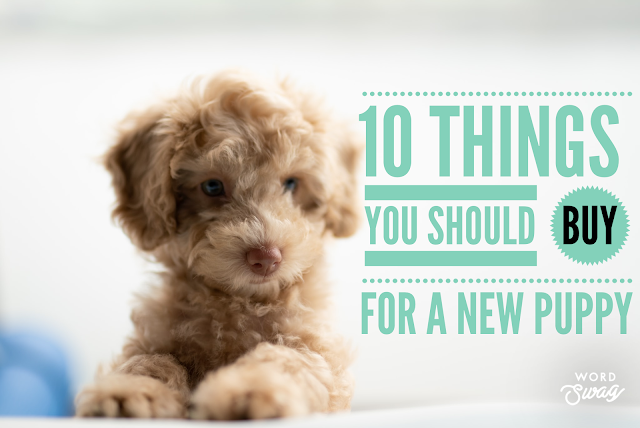 So as many of my readers know, I recently graduated from law school and have fully transitioned into young professional life. One of the reasons why I was excited to have a steady income and not be bouncing back and forth across the country anymore was that I would finally be able to get a pet! I am an animal lover through and through and have wanted one of my own for a long time. I had a fish for a few years in college, but we all know that isn’t the same as a furry cuddle companion.
My goal was to get a new pet sometime between October and December of 2019. I started my new job in August, so this gave me a few months to get settled and build up a little savings so I could afford a new pet. I lasted until October 13, when I adopted this little pup! 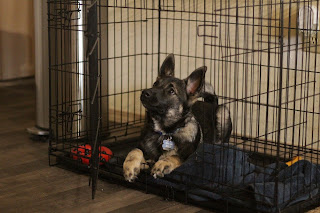 This guy was part of an accidental litter on a cattle ranch, and the owners were selling the puppies for $150 as a rehoming fee. My boyfriend and I hadn’t planned whether we were going to get a puppy from a shelter or a (responsible) breeder, and we felt like this guy was the perfect in-between.
Our puppy was only 7 weeks old when we got him, and so far it’s been a crazy couple months learning how to be a puppy parent. We still aren’t fully sleeping through the night every night, and spend a ridiculous amount of time discussing his bowel movements, but we are totally in love. I’m excited to be able to share some fun puppy content on the blog. But now that I am a few months in, I thought I would start out by sharing with you guys a list of things you’re going to want to buy if you get a new puppy!
1.  A medium sized bag of food.
So this is probably one of those “duh” items. You need to feed a puppy. But as soon as you go to a pet store, you will quickly see that dog food comes in several different sized bags. We started out by getting a large bag of food. We figured that he would be on puppy food for a year, might as well stock up, right? Wrong! About a month in, our puppy started having tummy troubles with a sensitive stomach, and we had to switch foods before we finished the big bag. We ended up giving the rest of the big bag away to another puppy owner in need, but we learned our lesson and now buy medium sized bags – big enough so you aren’t running to the store every week, but small enough that you won’t waste a crazy amount of money if you don’t use it all.

2. Plenty of toys.
Again. Duh.  You need toys for puppies. But get a lot. And I mean like, a lot. All different kinds. Hard toys. Squeaky toys, Crinkly toys. Rope toys. Balls. Frisbees. Bones. Get ‘em all. First, puppies LOVE playing with toys. Second, you don’t know what type of toy that your puppy will gravitate toward. Third, puppies destroy toys quickly, so it’s always good to have backup. For the first two months I had my puppy, I was going to Petsmart every week to buy new toys!
Pro Tip: Buy clearance holiday toys. Chances are that your puppy will destroy them anyway, and it’s better to buy cheap than to get full-priced toys that will be shredded.
Pro Tip #2: Get a toy box and keep all of your dog’s toys are together. This way, their scent mixes and it’s easier for your pup to associate “hey, these are mine”
Here are some of my favorite toys for a new puppy!

3. A leash and collar.
Even if you don’t plan on leash training your dogs, it’s good to get a leash and collar just in case. If you ever board your dog or have to transport them, you’re going to want a collar and a leash and it’s better to get your dogs used to them young. Further, puppies can be naughty and destructive, and sometimes you may even want to leash them inside the house to help keep an eye on them.
4. Edible Chews
One of the craziest moments as a puppy owner is when you look down and one of their toys are all bloody or when you find a tooth in their water bowl. Yep. Puppies go through teething just like babies. And when they are teething, they will turn into little piranhas that want to chew non-stop. I recommend getting some edible and easily digestible chews for your dogs to gnaw on to help with teething.

My dog is obsessed with pig skin chews - specifically pork chomps brand. He gets one of these bad boys every  night:


Need something to last a little longer? Try these - but be careful and don't get them until your dog has some of their adult teeth in:

5. Lots and lots and lots and lots of treats.
You’re going to spend a lot of time training your puppy, so it’s good to have a lot of treats on hand. I’ve found that it’s so much cheaper to order treats in bulk on Amazon. I’ve linked some of the ones I like below. Bonus: these are small so you don’t overfeed them in training.

6. Puppy Shampoo, Brush, and Nail Clipper
Did you know when your puppy is under 4 months old, they will take in anything they experience and learn how to process it as normal? So if you don’t want an adult dog who is afraid of baths and grooming – start early! Plus, puppies are messy. In the first month I had my dog, I gave him several baths. One to get him used to it, then another when he played in mud, and another when he vomited on himself. You’re not supposed to bathe dogs too much, but now my little guy just shrugs off baths. Do the same with brushing and clipping nails. Get ‘em used to it young.
7. Extra Towels
Did I mention puppies are messy? We now have designated dog towels – which are cheap towels I found on Amazon. We use these at the bottom of his crate, to dry him off after baths, to wipe his paws when it’s raining/snowing, etc. He also likes to chew on them. If you don’t want your good towels being destroyed, get some extra dog towels.
8. A crate, gate, or play pen
I know crating can be controversial, but no matter what your opinion is, there is probably going to be a period of time where you aren’t ready to let your puppy roam the house. You might want to gate off a room, put your puppy in a play pen, or even crate them. For us, we have a puppy who is easily overstimulated and won’t sleep unless he is in a crate in a dark room. It’s gotten to the point where when he is tired, he barks at us until we crate him so he can nap. But before the crate, we also tried a play pen. It didn’t work for us, but now I have a friend who uses it for her Boston Terrier puppy who loves it. We also gated off one of our bedrooms so our cat can have a puppy free space.

9. Hard soled slippers
This is a strange one, but I swear to god these have been a god-send for me. With a puppy, you’re going to be going outside a LOT. Often in the middle of the night. One thing I needed was a pair of hard-soled slippers that were warm and also could easily be taken on and off for quick potty breaks. You can thank me later for this tip. The ones I got are similar to these:

10. Dog waste bags
You might know you need these in theory, but I didn’t realize how quickly we would go through so many. Even if you have a yard and won’t be cleaning up after your dog each time, you’re going to need some in case you take your dog out in public, to someone else’s house, etc. I recommend buying in bulk because they are cheaper and it’s a lot more convenient.

Those are my major items that you need. Of course, every household is different. Some people may also want to get their dog a bed. I got one, but it ended up being a toy and I realized a bed was probably a good idea for later on. Some people may want a harness instead of a collar. That’s fine too. Mainly find what works for you. And if you need help, a local pet store is usually pretty good at helping you find the right products.

What are your puppy must-haves?