Why Every New Lawyer Should Do a Judicial Clerkship 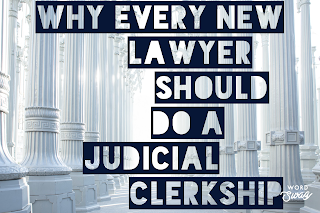 When I started law school, my plan was that after graduation, I would immediately go into private practice, start paying off debt with my high salary, and build up savings. In fact, that was the plan until I started 3L year and didn’t get my dream job. I didn’t get an employment offer that I had been hoping for at a firm I spent two summers at, and all of my plans began crumbling around me. As I waded slowly into the job market, I realized that a lot of the positions in the geographic area that I wanted to work in didn’t really fit my interests. Or at least what I thought my interests were. After a bit of soul-searching and job-searching alike, I landed a judicial clerkship with a state intermediate appellate court. I figured it would be a good way to start my career, get a year or two of experience, and then move on. Now, six months after beginning of my clerkship, I think taking this job is one of the best decisions I’ve ever made. Here’s a few reasons why:

They don’t really teach you how to be a lawyer in law school.

This is something that a lot of people don’t understand. Law school teaches you mostly doctrine. This is important, don’t get me wrong. The stuff you learn in law school is the basis of your whole career. But what about the practical stuff? Sure, you take legal writing and learn the basics of memos and briefs. You take ethics to make sure you don’t get disbarred. And you make take some types of advocacy class. But what about the day-to-day life of a lawyer? You don’t learn that.

Now, a lot of that learning is covered during summer and sometimes semester internships. That’s fair. But 20 weeks isn’t really long enough to get a good grasp on what it’s like to be a lawyer. You don’t learn what makes a good or bad lawyer on more than just a surface level.
A clerkship is a great way to learn the difference between good lawyers and bad laywers.
How? – You may ask. Well. You deal with lawyers all day long. Whether you are at a trial court or appellate court, you are going to be reading material from lawyers, listening to their arguments, and generally reviewing their work. Because as a clerk, you are assisting the judge in making his or her decision. In my court, I am the first to review the record and briefs, and I report back to my judge what is in the record. And believe me, it make a difference reading a brief written by a good lawyer. From proofreading, to following court rules, to sheer analysis of the law, certain lawyers tend to stand out in a good way.

The duty of the judiciary is to be impartial. And we are. However, do you know how poorly it reflects on a party to read a brief laced with errors, that’s missing headings, and where the logic just seems a bit reaching? It doesn’t make their argument or predicament seem more appealing. And I’ve told my judge on more than one occasion something along the lines of

“This brief is written poorly. Maybe if the lawyer tried harder, they could have better chance but they just couldn’t make it connect.”

You also learn which lawyers have good and bad reputations.
You’ll end up talking about which lawyers impress you. You’ll hear which lawyers the judges don’t like to hear from. This is especially important for scoping out future employment opportunities. If you know a lawyer is not well-liked by the court, there’s a good chance you don’t want to work for them. But a lawyer that is known to put out good briefs and craft strong arguments? Sounds like someone who could be an invaluable mentor.

It’s also good to have experience “on the other side of the bench.”

Lawyers craft arguments for judges to listen to and decide on. It’s much easier to craft an argument if you know what a judge might be thinking. You will learn the ins and outs of how a judge reviews a case, what things are generally appreciated and what might not be appreciated, and some of the little things that can make or break a case
.
For instance, certain jurisdictions are sticklers for court rules, such as formatting of headings. Courts will sometimes go as far to dismiss cases if these are formatted wrong. If this is the case, you definitely don’t want to be caught making such a simple but dire mistakes. Having experience as a clerk will teach you how to watch out for these kinds of things.

And of course, a clerkship looks great on a resume.

Although these are some of the lower-paying positions of the legal world, there’s a certain prestige that comes with a clerkship. This benefit will follow you throughout your whole career.